By BrightFocus Foundation on October 29, 2019 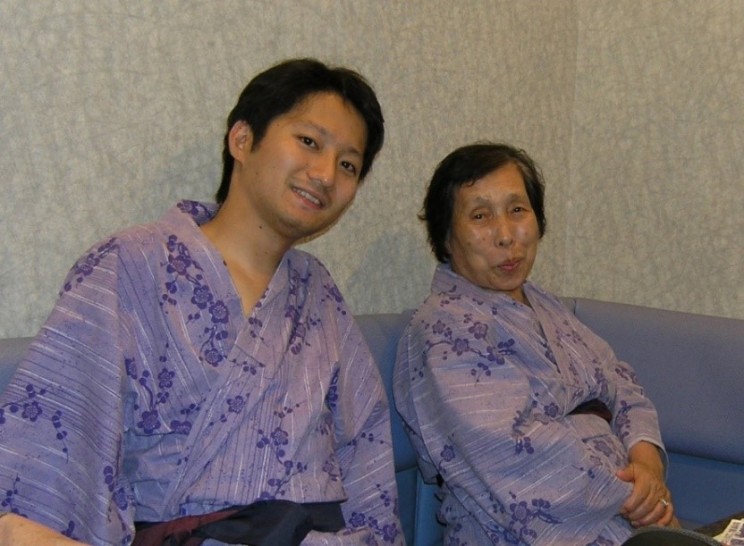 Image caption: Yuriko and me together for a trip to a hot spring. She did not recognize me, but could speak.

Since 1985, BrightFocus Foundation’s Alzheimer’s Disease Research program has awarded more than $128 million for highly innovative science to end Alzheimer’s. Right now, we are funding 105 research projects around the world, including an exciting study led by Kei Igarashi, PhD.

Dr. Igarashi saw first-hand how Alzheimer’s disease ravaged the brain of his late grandmother, Yuriko. Here is his story:

I started my career as a basic neuroscientist studying brain circuit mechanisms related to the sense of smell and then memory. While I was studying basic research during my PhD, my grandmother, Yuriko, started to show symptoms of Alzheimer’s disease. She was 78 at that time.

One day, she said ‘I put my purse here, but it’s gone! You stole my purse!’ Imagine how sad if your dearest grandma starts to doubt you. She was starting to lose her spatial memory and could not remember where she put her purse. We brought her to a doctor, even though she strongly refused. At that time, she was not diagnosed with Alzheimer’s, but as we anticipated, she was diagnosed a year later.

There were no drugs approved for Alzheimer’s disease in Japan at that time. All we could do for her is to have fun together; to prevent her brain from worsening. We often brought her along for short trips.

These efforts were, however, in vain. She started to lose personal recognition at 84. I was one of the first people she could not recognize. She called me ‘teacher.’ ‘Hello teacher, you have a beautiful baby,’ she said, when I visited her at her senior residence to show off my first baby. She loved my baby, but could not recognize that the baby was her first great-grandchild. I went out from the country to study more after that and was only able to visit once a year. She started to use diapers.

Every time I visited her, she did not recognize me. I was asking myself, ‘Am I visiting her for her sake, or for my own sake?’ At 89, she lost recognition of my mother, her own daughter. Now she was all alone.

You can help scientists, like Dr. Igarashi, find ways to better diagnose, prevent, and treat Alzheimer’s disease through a gift to Alzheimer’s Disease Research, a program of BrightFocus Foundation.

If you’re a military or federal employee, you can support Alzheimer’s Disease Research through the Combined Federal Campaign (CFC). Our CFC number is 30518.

If you’re a private sector employee, you can also help fund Alzheimer’s Disease Research through your employer’s workplace giving program.

Click here if your company would like to start a workplace giving program to support Alzheimer’s Disease Research. We have partnered with America's Charities, a workplace giving federation, which connects employees to the causes they care about the most.

Examples of what you and your employers’ donations to Alzheimer’s Disease Research can achieve are listed below:

To learn more about the research that you can help support, visit https://www.brightfocus.org/grant-search.

As a donor, you can support BrightFocus Foundation by donating to them through your employer’s workplace giving program (CFC#30518 if you're a military or federal employee participating in the Combined Federal Campaign). Payroll pledges made through employer-sponsored charitable giving programs represent a cost effective and near effortless way to support your favorite charities.

As BrightFocus Foundation's workplace giving partner, America’s Charities can help your company design and implement a program centered on supporting their work - through workplace giving campaigns, employee fundraising, cause-focused signature programs, volunteerism, donation drives, matching gifts, Dollars-for-Doers, In-Kind Giving and other employee engagement and philanthropic initiatives. Click here to request a demo and learn how we can help you do this.