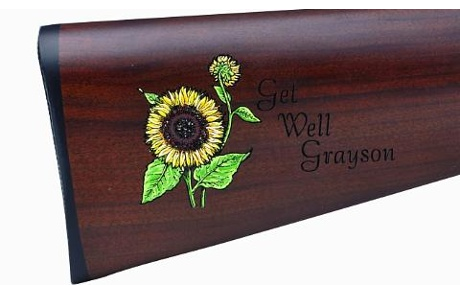 In early September, rifle manufacturer Henry Repeating Arms created 100 custom rifles featuring an engraved sunflower and the words “Get Well Grayson” in cursive script on the butt. The proceeds from the rifle were donated to Grayson Sutton, a four-year old from Sedan Kansas, battling primary pulmonary hypertension.

About a week later, alcoholic beverage company Diageo, which owns brands Johnnie Walker, Smirnoff, Tanqueray and Guinness, among many others, donated 34,560 bottles of water – “enough to fill a semi-truck”, as the company proudly proclaimed in a press release about the donation – to the residents of Tulare County, one of the areas hardest hit by California’s drought. A month earlier, an investigative piece in Mother Jonesmagazine had revealed that most bottled water in the United States comes from drought-ridden California, where Arrowhead and Crystal Geyser are soaking up groundwater, and Aquafina and Dasani are filtering and bottling municipal tap water.

As October rolls around, National Breast Cancer Awareness Month in the US, the inevitable annual pinkwashing is in full swing. While people are still talking about the ill-conceived Kentucky Fried Chicken pink bucketfrom a few years ago, there are plenty of more recent examples of wrong-headed pink-ribbon campaigns.

To name just a few: Baker Hughes is producing and selling hot pink fracking drill bits, for which it donated $100,000 to breast cancer charity Susan G Komen. Alhambra water is selling pink-ribbon-labeled plastic polycarbonate water bottles that contain bisphenol-A (BPA), an endocrine-disrupting chemical that has been linked to various hormonal cancers, including breast cancer. In 2012, the Susan G Komen Foundation declined a donation from Pornhub.com which had raised one cent for every boob video viewed on the site, but this year the foundation will be receiving funds from sales of pink-bordered Nascar shirts that encourage people to “check their headlights”.

The NFL, as it deals with accusations of protecting perpetrators of domestic abuse, has rolled out its “Crucial Catch” campaign for breast cancer awareness month, a campaign that promotes early screening as a solution, an assertion that flies in the face of current research, which indicates that early screening and detection has little to no correlation to breast cancer survival rates.

That’s just three weeks worth of examples of corporate philanthropy gone wrong. It’s an increasingly common occurrence, both because more companies are giving more money than ever before and because it has become easier than ever to catch companies in a giving gaffe.

In some cases, companies have the best of intentions. Henry Repeating Arms, for example, genuinely wanted to help out a local kid, and the $40,000 it raised for the Sutton family is no doubt appreciated, despite the flawed logic of connecting guns with four-year-olds. In other cases, the discordant donations stem from a drive for sales or brand recognition run amok.

Companies that get corporate donations right tend to have crafted a clear strategy, aligned themselves with a particular nonprofit and committed to doing more than a one-off campaign or donation.