What it's Like to Work in Mississippi's Only Abortion Clinic

What it's Like to Work in Mississippi's Only Abortion Clinic 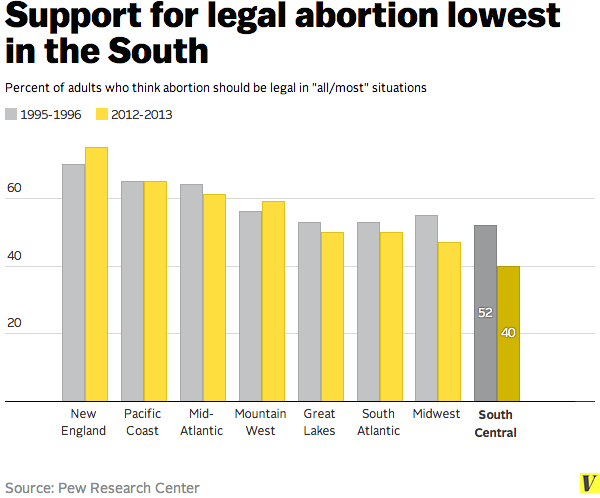 There are three doctors who terminate pregnancies at Mississippi's only abortion clinic, a bright pink building in Jackson. Two keep their identities private: legal documents only refer to them as "Drs. Roe and Doe." This anonymity is not atypical for abortion providers, who often face harassment and threats of violence. Eight abortion providers have been murdered in the past two decades, and another 17 have been victims of attempted murders. The third doctor who provides abortions in Mississippi is Willie Parker.

Parker is a rarity — not only because he provides abortions in the Deep South, but because he is so public about his work. He was recently the subject of a lengthy Esquire magazine profile titled, "The abortion ministry of Dr. Willie Parker." He has conducted dozens of interviews, which he said he sees as a form of advocacy.

For years, Parker worked in urban areas of the country, places like Chicago and Washington, DC, providing abortions in areas of the country where the practice was largely uncontroversial. But last month, he moved back to his home state of Alabama with the express purpose of providing abortions in hostile territory — and leading the fight to keep Mississippi's one clinic, the Jackson Women's Health Organization, open.

"It was … a conscious decision to make myself more available to provide care in the region where access has been greatly limited by the political climate," Parker said. "It became important to me to make sure these services are available in the region of the county where I come from."

The South has become increasingly anti-abortion. In 1995 and 1996, the Pew Research Center surveyed each region of the country on their support for legal abortion in all or most situations.

But by 2012, the next time Pew repeated its survey, that number had...