Victory! Immigration Authorities Must Stop Coercing Immigrants Into Signing Away Their Rights

Victory! Immigration Authorities Must Stop Coercing Immigrants Into Signing Away Their Rights 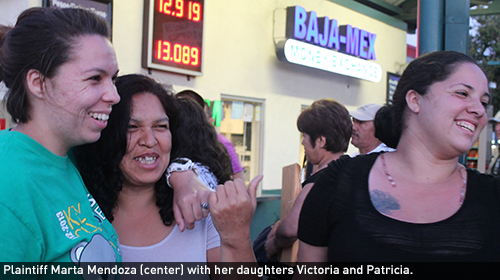 By Gabriela Rivera and Mitra Ebadolahi

One night last summer, Patricia's mother, Marta, did not come home. She had been in poor mental health, but it was unlike her to simply disappear without a word. Marta Mendoza was born in Mexico but lived in the United States for decades, where she raised six U.S. citizen children. As Patricia and her sisters desperately searched their Los Angeles neighborhood for their mother, Marta was in Immigration and Customs Enforcement (ICE) custody being pressured to sign a "voluntary return," which would result in her immediate expulsion to Mexico without an immigration hearing. If Marta had been permitted to go before a judge, she could have won the right to remain here lawfully on account of her U.S. citizen children. Patricia didn't hear from her mother until Marta called from Mexico, scared and confused about what had happened to her.

In June 2013, the ACLU filed a class action lawsuit, Lopez-Venegas v. Johnson, on behalf of three Southern California immigrants' rights organizations, as well as eleven individuals, including Marta, who the government had expelled through unfair "voluntary returns."

After more than a year of litigation, including intensive discovery and the depositions of key government officials, the government has agreed to significant reforms of the "voluntary return" system in Southern California.