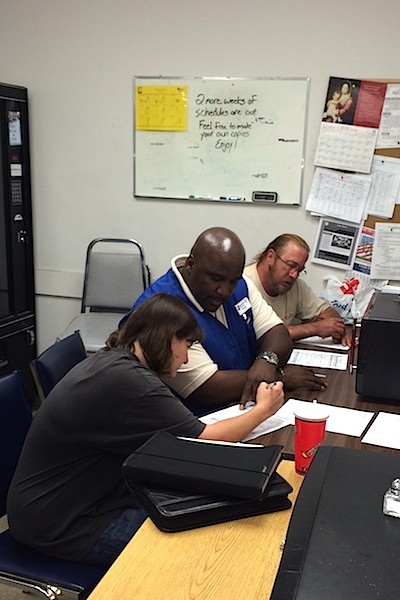 When I came to the Goodwill, I had just been released from prison. I had just served 9 years of a 12-year sentence, a federal sentence for crack cocaine distribution.

I was actually in the United States Marine Corps. I was in the Marine Corps from 1990 to 1994. When I got out of the military, there were not very many opportunities in the area I lived in. It was a relatively small area, but I was raised there and I figured, coming out of the military, I would have chances. I got out of there and really just got wrapped up with the wrong people. I started hanging out with a bunch of people who were selling drugs, doing those types of things. Because of a lack of money, I Was like, ok, this was what I needed to do. That was really how I got involved in crime.

I had seen it growing up, avoided it, did everything I could to avoid it. But then, when I got out of the military, I progressed into that and turned into something I didn’t want to be. I had seen many people get out of prison and go back, and it turns into kind of a revolving door for them. I was really worried about my prospects. I was a first-time offender. I had never been in trouble before, never had anything happen, and the first time I got into some trouble, I went to prison for almost a decade. It was very disheartening for me because I just didn’t know what kind of opportunities would be there for me. I only had a high school diploma and I had been in the military, so I really didn’t know what was going to happen. I didn’t think I would be able to get a good job. Even when I was looking for jobs, even my military background didn’t really—I won’t say it didn’t matter, but people looked at it and it was kind of menial. I just didn’t want to do it, and then I got lazy, and that’s what made me go into that lifestyle.

There was a posterboard on the wall at the halfway house. I saw the name, and it said something similar to helping out veterans. I was like, “Well, I’m not homeless,” because I saw the description, and it said Homeless Veterans Reintegration. All I saw was “reintegration” and “veterans,” so I was like, you know what, I’m going to call this guy. So I called him, and that’s how I initiated contact with the program.