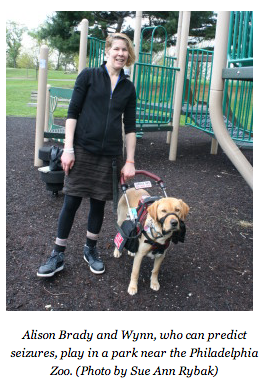 Before Alison Brady received her first seizure alert dog in 2004 from Canine Partners for Life, she felt as if she was being held hostage by her disability. “At that time in my life, I was having like 100 seizures a month,” said Brady, who was diagnosed with AVM (Arteriovenous Malformations, or abnormal connections between arteries and veins) when she was five years old. “My life was very different.”

Brady, 45, vividly recalled when suffering from her second stroke at the age of five. “I was getting another piercing headache that was so bad I just curled up on our love seat crying,” she said.

Later that night Alison drifted in and out of consciousness as her body convulsed violently. “I remember I was wrapped up in a blanket my mother made and rushed off.”

Brady was rushed to Children’s Hospital of Philadelphia to have emergency brain surgery. It was then that the surgeons discovered a two-centimeter AVM. “The doctors told my parents they didn’t think I was going to live,” Brady said. “They put in an inter-cranial bolt that is a drain and put me in a barbiturate coma to lower my body temperature and decrease the pressure and swelling in my brain.”

After the 28-hour surgery, Brady woke up in the intensive care unit to discover she had a shaved head and 144 stitches that ran from her temple to her jawline. Since then Brady has suffered from chronic seizures, muscle weakness, migraines, dizziness and memory problems. Brady’s seizures forced her to be confined to her house. Everyday activities such as walking to the park, climbing the stairs and taking the bus alone often resulted in severe injuries.

“Getting a service dog is probably the best thing I’ve ever done in my life,” said Brady, who lives in Brewerytown with her husband Jimmy and 14-year-old daughter, Grace. Thanks to volunteers like Michael and Linda Dzuba, of Mt. Airy, and Mariana Sorenson, of Chestnut Hill. Brady’s life is “Wynnderful.” For the last two and half years, Dzuba and his wife have participated in Canine Partners for Life’s puppy raising program.