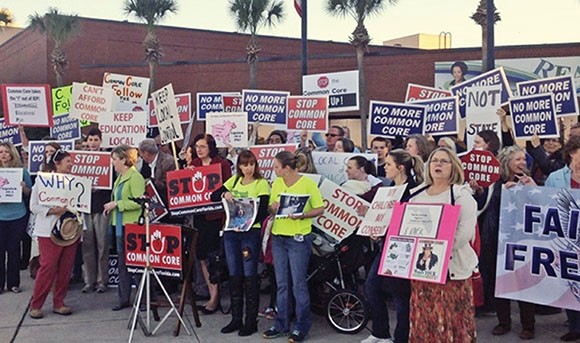 The fierce grassroots campaign threatening to derail the Common Core State Standards is being fueled by far-right propaganda that relies heavily on distortions, outright falsehoods and demonizing conspiracy theories promoted by antigovernment extremists, according to a report released today by the Southern Poverty Law Center (SPLC).

Now being implemented in 44 states, the Common Core is a set of learning standards that identify the literacy and math skills children in America’s public schools, wherever they live, should master at each grade level.

But to Christian Right, Tea Party and antigovernment activists, the state-driven effort to lift student achievement is actually “Obamacore,” a nefarious, left-wing plot to wrest control of education from local school systems and parents. Instead of the “death panels” of “Obamacare,” the fear is “government indoctrination camps.”

“These claims may sound outlandish – and they are – but the fact is, millions of Americans are absorbing this extremist propaganda, and it’s having a very real impact,” said Heidi Beirich, director of the SPLC’s Intelligence Project. “These lies are being repeated in churches, legislative hearings and town hall meetings across the country.”

The report, Public Schools in the Crosshairs: Far-Right Propaganda and the Common Core State Standards, was researched by the Intelligence Project and the SPLC’s Teaching Tolerance program.