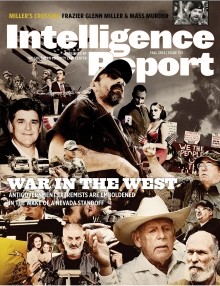 Extremists from various segments of the radical right lashed out this spring with three murder sprees that left a dozen victims dead – mass murders that are explored in the latest issue of the Southern Poverty Law Center’s Intelligence Report, released today.

The three high-profile attacks were each driven by hatred of a distinct target: the government, women and the Jewish community.

The Fall 2014 issue of the quarterly investigative journal also features a behind-the-scenes account of the standoff last April between federal agents and heavily armed militiamen at a Nevada ranch – a militia “victory” that emboldened the antigovernment movement and led to new confrontations.

“The lesson from this past spring is that the radical right poses a very real and deadly threat, one that should not be taken lightly by law enforcement or those in government who combat domestic terrorism,” said Mark Potok, senior fellow at the SPLC and editor of the Intelligence Report. “The standoff at the Bundy ranch in Nevada was a highly coordinated, military-style operation by far-right extremists that could have easily ended in a bloodbath.”