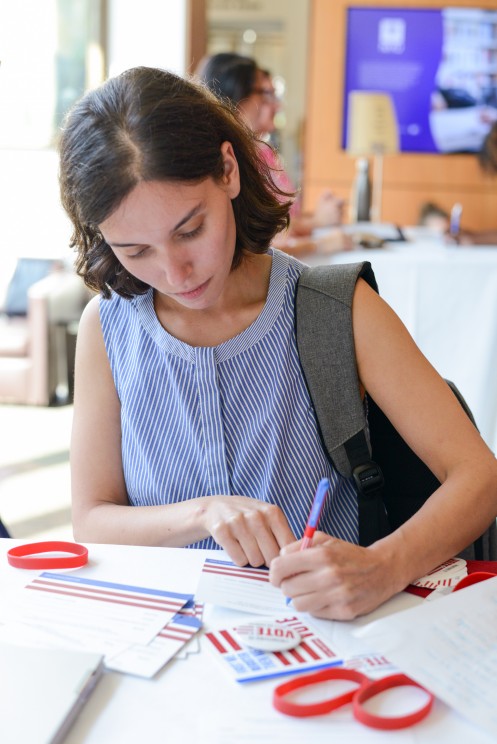 In his testimony before Congress in July, Special Counsel Robert Mueller pointedly warned the nation about Russia’s ongoing attempts to meddle in our nation’s elections.

All Americans, regardless of their political beliefs, should be gravely concerned about this threat from abroad. But we should be equally – perhaps even more – concerned about efforts to rig our elections from within.

Since the U.S. Supreme Court gutted a key provision of the Voting Rights Act in 2013, partisan politicians at the state level have enacted a wave of voting restrictions that have disenfranchised hundreds of thousands, possibly millions, of people.

The promoters of these laws claim they’re intended to prevent individual voters from committing fraud at the ballot box, such as voting more than once or voting when they are not eligible. But that’s a fig leaf – and a skimpy one at that. Researchers have confirmed through exhaustive studies that such fraud is a myth.

The real threats to democracy are laws and election procedures clearly designed to help the party in power win elections by placing needless barriers in front of African Americans, low-income voters and others who are more likely to vote for their opponents.

Immediately after the Shelby ruling six years ago, for example, North Carolina lawmakers enacted new voting restrictions that were later struck down by a federal court as an unconstitutional effort to “target African-Americans with almost surgical precision.” The law’s voter ID provision, the court wrote, “retained only those types of photo ID disproportionately held by whites and excluded those disproportionately held by African-Americans.” The law also contained other harmful provisions, such as eliminating early voting, that disproportionately affected black voters.

To its credit, the U.S. Supreme Court let the lower court’s ruling stand.

But this summer, the Court decided that disputes over another form of election-rigging – partisan gerrymandering – are “non-judiciable,” meaning it will not intervene when politicians intentionally draw legislative and congressional districts in ways that give them a partisan advantage.

The partisan gerrymanders in these cases deprived citizens of the most fundamental of their constitutional rights: the rights to participate equally in the political process, to join with others to advance political beliefs, and to choose their political representatives. [They] … debased and dishonored our democracy, turning upside-down the core American idea that all governmental power derives from the people. These gerrymanders enabled politicians to entrench themselves in office as against voters’ preferences. They promoted partisanship above respect for the popular will. They encouraged a politics of polarization and dysfunction. If left unchecked, gerrymanders like the ones here may irreparably damage our system of government.

Whether based on race or the political preference of voters, gerrymandering can sometimes result in the control of legislative bodies by parties that get fewer votes than their opponents when every member is on the ballot. Indeed, this happened in the elections for the U.S. House of Representatives in 2012, when Democrats picked up 1.4 million more votes than Republicans, yet Republicans won 33 more seats. In 2018, majorities of voters in Pennsylvania, Michigan and North Carolina chose Democrats for state House races, yet, because of gerrymandered maps, Republicans maintained their House majorities in those states.

To be clear, the Court’s ruling did differentiate between gerrymandering based on pure partisanship and that based on race. Chief Justice John Roberts wrote that redistricting plans that “explicitly discriminate on the basis of race … are of course presumptively invalid.”

But some civil rights lawyers fear this may be a distinction without a real difference and that the new precedent could have unintended consequences for legal challenges to racial gerrymandering. Kristen Clarke and Jon Greenbaum of the Lawyers’ Committee for Civil Rights Under Law wrote:

The Supreme Court’s Rucho decision may lead legislators to believe that they can get away with racial gerrymandering in places where race and party are highly correlated, by defending these claims on the basis that their decisions were made for partisan, not racial, reasons. Although the Rucho decision did not give an express imprimatur to such connivance, history has shown that those intent on discrimination will use any means available to achieve their goals.

The Supreme Court’s decision comes at a crucial time. After the 2020 Census, every state will redraw its lines for their statehouses and congressional delegations. Those new maps could help politicians lock in their power – and their policies – for years even when their constituents expressly vote for something different.

Whether it’s gerrymandering, voter suppression or other types of election-rigging by, it’s clear that our electoral system – and democracy itself – is under assault.

That’s why the Southern Poverty Law Center this year launched a new legal team to join the fight for voting rights in the courts and legislatures across the Deep South.

In early July, the SPLC filed suit against the state of Florida to overturn a new law that contradicts the explicit language of Amendment 4, a ballot initiative approved by 65 percent of Florida voters last November. The amendment overturned a provision of Florida’s 1868 constitution that prevented 1.4 million people from voting because of previous criminal convictions. Seeking to undermine the intent of Amendment 4, the Florida Legislature passed a law requiring those new enfranchised voters to pay off all fines and fees related to their sentence before they can regain their voting rights – effectively disenfranchising many of them again.

The SPLC is also fighting to overturn a similar, Jim Crow-era law in Mississippi, one that strips voting rights – for life – from people convicted of certain crimes. Today, the law prevents one of every six black adults in the state – and some 200,000 people overall – from casting a ballot.

These are just a few of the cases and causes the SPLC is taking up as it works to end systematic voter suppression and ensure that everyone has an opportunity to make their voice heard at the ballot box.

“Many people fought and died so that all citizens have a voice in our society through the right to vote, yet many men and women – disproportionately people of color and poor people – have been denied this right,” said Nancy Abudu, the SPLC’s deputy legal director for voting rights. “A healthy democracy depends on full participation by all members of society.”