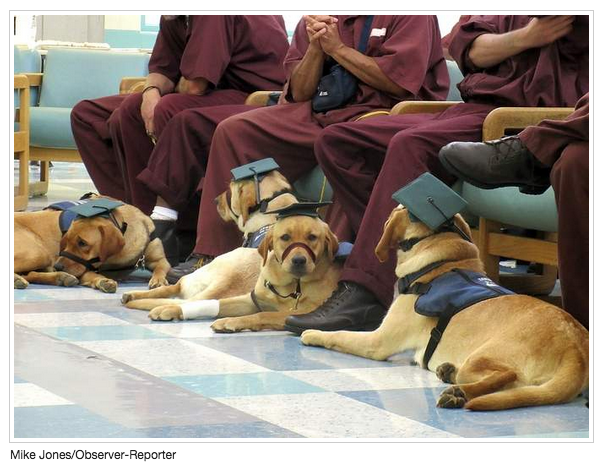 WAYNESBURG – The 15 inmates chosen to train Labrador retriever service dogs at the state prison in Greene didn’t get much sleep the first night that five puppies spent in their block in March 2014.

“I don’t know if they were expecting the whimpering all night and the bathroom breaks,” said Tina Staley, who serves as the prison’s program coordinator.

“It was different. They cried the first night and they all had puffy eyes the next morning,” she said of the men paired up with the dogs. “It brought humanity to the jail.”

More than a year later, the five adult females finished their basic obedience lessons and are now prepared to begin their next phase with the Canine Partners for Life program that matches up service animals with people who need them. A graduation ceremony for the dogs and their trainers was held Tuesday morning at SCI-Greene to celebrate the accomplishment.

As the recipients walked up to receive their certificates, each of the five dogs gave a shake and knocked off the graduation mortarboards placed on their heads, bringing a chuckle from the audience of family and staff gathered for the ceremony.

“It’s been a great experience,” said Richard, who helped to train Amber. “It’s been a chance to find companionship with an animal and take responsibility and give back.”