Report: Pro Bono Now Prevalent in All Areas of Philanthropy

Report: Pro Bono Now Prevalent in All Areas of Philanthropy 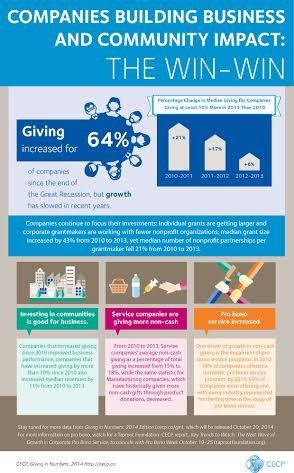 The report, Giving in Numbers: 2014 Edition, illustrates what a popular and important feature pro bono service has become to companies and nonprofits alike. In 2013, the median value of pro bono across all industries was $300,000, comprising a key reason why corporate giving increased for 64 percent of companies since the end of the Great Recession (although growth in giving has slowed overall in recent years, which I have previously addressed). Among companies reporting pro bono service dollar values in 2013, 67 percent have increased cash contributions since the end of the Great Recession.