By Pennsylvania Coalition Against Domestic Violence (PCADV) on March 27, 2017 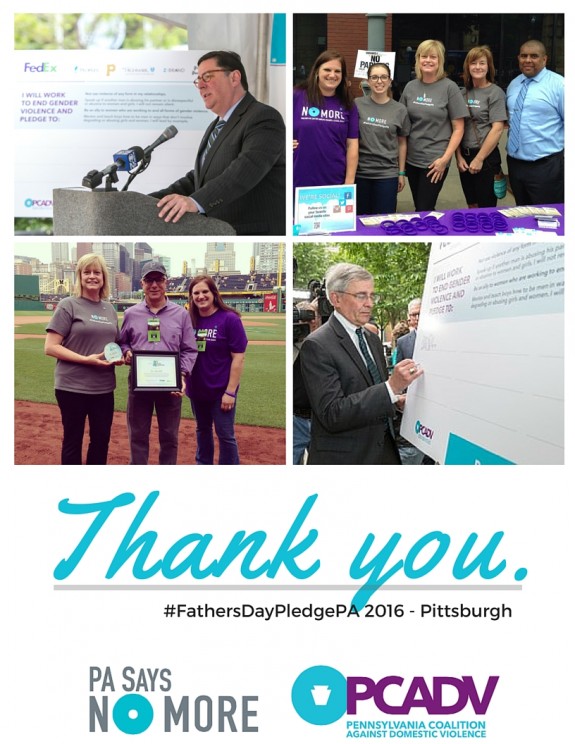 The Pennsylvania Coalition Against Domestic Violence (PCADV) has attained remarkable achievements in promoting safety and justice for victims of domestic violence in Pennsylvania and across the country in its 33 year history. Part of that success is thanks to partnerships they’ve formed with organizations like Pennsylvania’s Major League Baseball teams - the Pittsburgh Pirates and the Philadelphia Phillies.

As a result of recent National Football League (NFL) issues concerning domestic violence, Major League Baseball (MLB) required all their teams be trained in domestic violence, sexual assault and child abuse. From this initial meeting, both teams initiated increased partnership, wanting to do more to show their solidarity against all forms of violence, and sustain their commitment to what they learned in their trainings.

Initiated in 2014 for the 2015 campaign season as an event sponsorship partnership, both teams now partner with PCADV for the #FathersDayPledgePA each year. Both teams dedicate a home game in June to expand gender violence awareness and film annual PSAs of their players speaking out about gender violence. At the games, PCADV is given a pre-game on-field ceremony to recognize its local domestic violence organizations and Excellence in Male Leadership award winners. They also have the opportunity to table inside or outside of the stadiums, providing information and getting pledge signings. And sometimes (depending on the teams playing) PCADV may also get game tickets to give to local programs and a suite to share with sponsors.

MLB Team’s Partnership with PCADV is Benefiting Everyone Involved

This partnership is helping PCADV in a variety of ways. In addition to both teams providing a male leader within their organization to volunteer time to chair our Excellence in Male Leadership nomination process, the level of the teams’ in-kind donations grows each year – allowing PCADV free ads in their program pages, a free recognition game, free PSAs and the ability to use those PSAs in future PCADV social marketing campaigns.

In exchange, PCADV helps both teams meet their CSR goals. Also, given the tense climate of national level sports teams and issues like domestic violence and sexual assault, PCADV provides an avenue to show the public that these teams are partnering and committed to eliminating these issues.

So far, as a result of these partnerships, PCADV has been able to grow the reach of its campaign exponentially during the three years they’ve been working together. The backing of two Major League Baseball teams has also enabled PCADV to seek and be awarded larger sponsorships and new partners who are interested in being a part of this campaign.

Organizations interested in being part of this campaign or forming a partnership with Pennsylvania Coalition Against Domestic Violence should contact Eliz Nestorov at enestorov@pcadv.org or call 717-545-6400 ext. 129. To learn more about PCADV’s work, visit www.pcadv.org.

Any Organization Can Support PCADV’s work through a well-designed corporate philanthropy program:

As PCADV’s workplace giving partner, America’s Charities can help your company design and implement a program centered on supporting their work - through workplace giving campaigns, employee fundraising, cause-focused signature programs, volunteerism, Dollars-for-Doers, In-Kind Giving and other employee engagement and philanthropic initiatives. Click here to request a demo and learn how we can help you support PCADV’s important work.