For Needy Students, Eyeglasses Open a Portal to the World of Learning

For Needy Students, Eyeglasses Open a Portal to the World of Learning 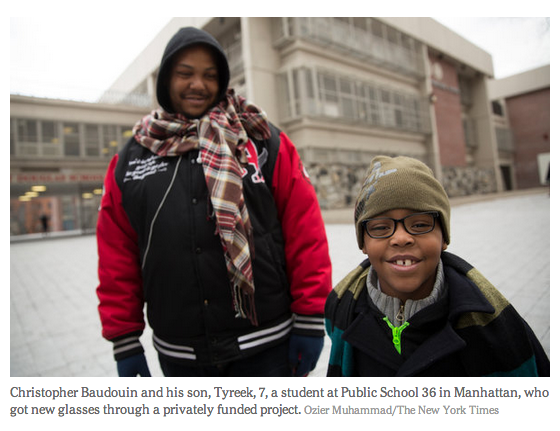 An expert at sidling, Robert edged his way to the front of the classroom and bent right into the diorama held by another child. The fourth grade at Public School 49 in the Mott Haven section of the Bronx was divided into teams to present ecosystems. By bending into the exhibit, Robert could make out the labels for reptiles and cactus and sand.

Robert doesn’t have glasses and needs them; so do 150 other students at P.S. 49, according to Frank Hernandez, the principal. Under a privately funded project, they and students at two other elementary schools will be getting glasses in the coming days.

But they are a fortunate few. It’s likely that thousands of children in New York City’s schools have uncorrected eyesight based on the results of vision tests given to about 2,000 children in those three elementary schools by the Children’s Health Fund.

“Twenty-one percent of those children failed,” said Irwin Redlener, a pediatrician and president of the fund. In the three schools, about 400 children needed glasses.