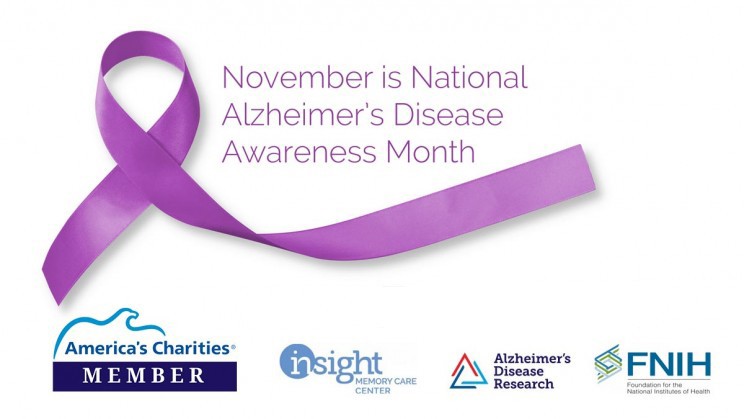 President Ronald Reagan designated November as Alzheimer's Disease Awareness Month in 1983 when there were less than two million people suffering from the disease. Since then, that number has grown to more than five million.

One of the most cost-efficient ways you can support these nonprofits is to donate to them via payroll deduction through your employer's workplace giving program (Don't have a program? Click here to have your employer contact our team.) Click on each charity's name below to learn more about their work, and to make a donation now!

Alzheimer's - Insight Memory Care Center
Provides care, support, and education for individuals with Alzheimer's disease and other memory impairments, their families, caregivers, and the community, through their adult day health and resource center.

FNIH (Foundation for the National Institutes of Health)
Generates and implements new research models that lower the cost and accelerate the progress of biomedical research through public-private partnerships. One of the many groundbreaking initiatives FNIH manages is the Alzheimers Disease Neuroimaging Initiative (ADNI). The Alzheimer’s Disease Neuroimaging Initiative (ADNI), is a landmark partnership and study that for years has profoundly influenced our understanding of Alzheimer’s disease (AD) by identifying the earliest changes in brain structure and function that signal its onset and progression.