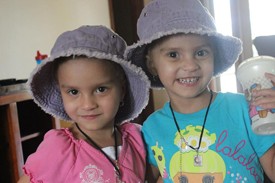 Life was hectic yet wonderful for the Housel family when identical twins Ashley and Samantha arrived in 2010. It became even more hectic when, shockingly, both twins were diagnosed with acute myeloid leukemia (AML) in December, 2013.

Their cancer journey began when Ashley complained of leg pain. Upon examination, her mom, Monique, saw that the leg was swollen with a small spot on it from which veins were radiating. Monique brought Ashley to the pediatrician who first performed an ultrasound to make sure Ashley's arteries weren't blocked. The test was normal, so another ultra sound was performed. It showed that her kidneys were full of fluid. Because this was not normal, Ashley was sent to St. Mary's Medical Center in West Palm Beach, Florida where a CT scan was performed. The results showed a mass in her abdomen.

Ashley spent two weeks in the hospital undergoing more tests. Eventually, a stent was implanted to help relieve the pressure on her kidneys and a biopsy of the mass was performed.

While Ashley was in the hospital, her twin sister, Samantha started experiencing symptoms that were remarkably similar to Ashley's. This time, when her parents called the pediatrician, they were told to go straight to the hospital. Like her sister, Samantha underwent a CT scan and a mass was found, and hers was larger than Ashley's.

>> Support CureSearch's Work With a Donation