Manny, the Famous Frenchie, Joins the Fight Against Pet Cancer

Manny, the Famous Frenchie, Joins the Fight Against Pet Cancer 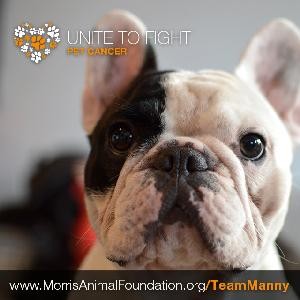 It’s not every day you bring a new puppy into your home—let alone one that becomes famous. That’s exactly what happened to Jon and Amber Huang after they added Manny, a French Bulldog, to their family.

The Huangs have been dog lovers their entire lives, but it wasn’t until their Rottweiler-Beagle mix, Roscoe, developed cancer that they decided to add a second dog to their family. Jon and Amber thought having a puppy around would help keep 16-year-old Roscoe happy during his last year of life, and it did. Manny quickly became Roscoe’s “little brother.”

Sadly, shortly after bringing Manny home, Roscoe lost his fight with cancer. His memory remains alive, though, thanks to Manny. Since Roscoe’s death, Manny has undoubtedly become the Internet’s most famous French Bulldog. He has his own website; pages on Instagram, Facebook and Twitter; and even an iPhone app.

“It all started with one Instagram picture,” Amber says. “We never intended for Manny to become famous. Our goal was to get 100 Instagram followers for fun.”

Manny now has more than half a million Instagram followers and has started a worldwide trend with people sharing and promoting their Bulldog photos via Instagram and Twitter.

Manny isn’t just popular, however. The Huangs have used Manny’s fame to do good by raising money for many charities including the ASPCA, the Chicago French Bulldog Rescue, Best Friends Animal Society and the American Cancer Society. Now they are helping Morris Animal Foundation’s efforts to fight canine cancer.