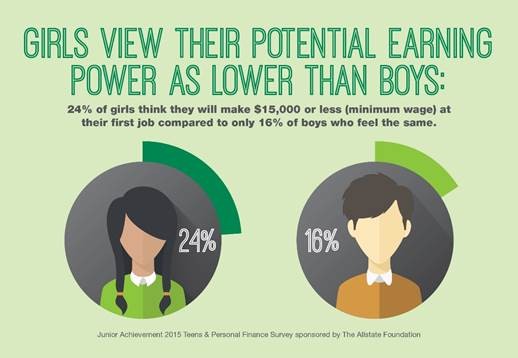 NEW YORK, NY— Junior Achievement USA® (JA) and The Allstate Foundation released startling findings from the 2015 Teens & Personal Finance Survey, which expanded to include parents in the personal finance discussion for the first time in its 16-year history.

The 2015 survey reveals that nearly half of teens (48 percent) think their parents will help pay for college but only 16 percent of parents (of teens) report planning to pay for post-secondary education. Junior Achievement USA has commissioned the Teens & Personal Finance Survey for the last 16 years, partnering with The Allstate Foundation since 2005. The 2015 study was conducted online on Junior Achievement’s behalf by Harris Poll in January 2015 among 801 parents of teens ages 13-18 years old and 800 teens ages 13-18 years old.

“Based on this year’s findings, it is obvious that parents and teens need to have honest conversations about money management, including paying for college,” said Joseph Peri, president of JA New York. “Together as a family, it is important to develop a plan for life after high school – whatever that looks like for your family. As an organization that strives to empower all young people to own their economic success, JA will continue to help open these channels.”

The survey also reinforces that parents serve as teens’ biggest teachers when it comes to money management skills. Eighty-four percent of teens report looking to their parents for information on how to manage money, but more than a third (34 percent) of parents says their family’s approach to financial matters is not discuss money with their children and “let kids be kids.” Millennial parents, ages 18-34, are the least likely to be confident about explaining money management to their kids: 60 percent report feeling confident, while 76 percent of parents ages 35-44 and 79 percent of parents ages 45-54 report feeling the same.

When parents are talking to their kids about money, they are leaving girls out of the conversation more frequently. Teen girls are more likely than boys to say their parents don’t talk to them enough about money management (40 percent to 24 percent) and paying for college (34 percent to 23 percent). When asked about their future earning power at their first “real” job, 24 percent of teen girls think they will make $15,000 or less, while only 16 percent of boys feel the same. Moms also are significantly more likely than dads to say their child will earn $15,000 or less (26 percent to 17 percent).

Since 2005, Junior Achievement and The Allstate Foundation have partnered to provide students with valuable information about personal finance in the classroom and help them apply it in their lives. The JA Economics for Success® program, created in partnership with The Allstate Foundation, has helped more than 1.2 million students set personal goals about money and make wise financial choices. The program also helps empower students to develop, plan and set goals to help protect them from unexpected financial pitfalls.

Other key findings from the survey include:

>> Give to Junior Achievement

>> Give to Junior Achievement of New York