If Someone Gave You $500 to Change Your Part of the World, How Would You Spend It?

If Someone Gave You $500 to Change Your Part of the World, How Would You Spend It? 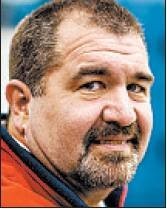 When Chris Ford received $500 from his church to “change his part of the world,” the Chicago real estate executive reeled his life’s tape back to a pivotal moment: when his high school football coaches bussed he and his teammates to FCA Camp in Estes Park, Colo. Sensing a need for male guidance in the inner city where he coached, Ford knew where the money would be best invested.

After working in real estate in Chicago for more than 20 years, Ford suffered a heart attack one year ago. The setback rescaled his life’s priorities and inspired him to become a stable presence for athletes in the city who were restless in a father’s absence. A need to give back nestled into his reshaped heart.

As a former football player at Geneseo High School in Illinois and Augustana College, Ford was provided with a stable coaching staff which was paramount in his character and spiritual development.

He began coaching on the football field at North Lawndale College Preparatory High School in the inner city of Chicago, assisting linebackers and pouring into his athletes during the consistent time spent with them. Many of the kids come from homes without a father figure, so a coach evolves more into that role.

In the windfall of a real estate transaction, Lasalle Street Church had received a significant amount of money and decided to reverse tithe, giving $500 to each member to do good works in their sphere of influence—a Kingdom investment. When Ford—who’s attended for more than 20 years—received his portion, he went to the Lord in prayer. Through that and assessing his current role as a coach, he knew the best use of the money would be to start a Huddle at North Lawndale.

“It was one of those unique things that a church would give back to its members and challenge them to make a difference for the Kingdom,” Greater Chicago Area FCA Representative Jim Johanik said. “And that was Chris’s manifestation of that challenge, to invest in something that gave him the most degree of life change as a youth.”