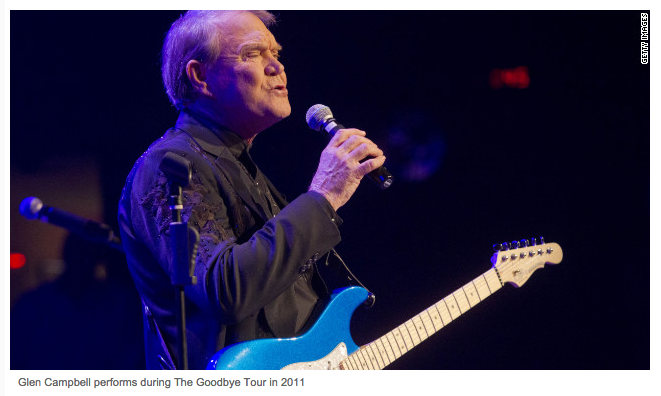 (CNN) -- Even if you've never been a fan of Glen Campbell, this one's certain to tug at your heartstrings.

The Country Music Hall of Fame member, who was diagnosed with Alzheimer's disease in 2011, is out with the video for the final song he'll ever record -- "I'm Not Gonna Miss You." It was recorded in 2013 with producer Julian Raymond.

"I'm still here but yet I'm gone/ I don't play guitar or sing my songs," the tune begins as it details his struggles with the disease.

The poignant music video that accompanies it spans Campbell's career. It contrasts Campbell singing in the studio with home video and clips from throughout his career. There are even images of doctors discussing his brain scans with him.

Because of the progression of the disease, the 78-year-old Campbell was admitted to a special care facility in Nashville in April.

"Sadly, Glen's condition has progressed enough that we were no longer able to keep him at home," Campbell's family said in a statement to Rolling Stone. "He is getting fantastic care and we get to see him every day. Our family wants to thank everyone for their continued prayers, love and support."