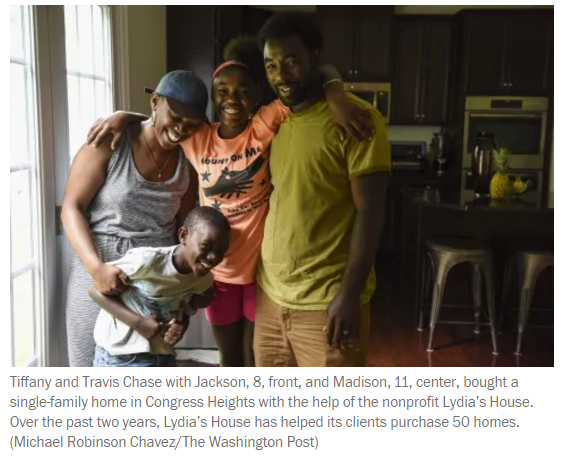 Leon Waddy grew up in the District’s Shaw neighborhood in the ’80s and ’90s, but he doesn’t recognize much of it these days. African American residents used to make up 90 percent of the neighborhood. Today, they’re less than 50 percent.

That is why Waddy and his wife, who were renting in Congress Heights, looked to historic, majority-black Anacostia in Southeast Washington when they began searching for a home.

“We wanted a neighborhood where we would feel at home, that would be like the D.C. that we know,” said Alison Waddy, 31, principal of the Oklahoma Avenue campus of the AppleTree, a public charter preschool. “And that’s what we found here.”

“They look like us,” Leon Waddy said of his neighbors.

With home prices across the city continuing to rise, east-of-the-river neighborhoods such as Anacostia and Congress Heights, which the District housing boom had largely passed over, are becoming increasingly desirable — and expensive.

As more investors and homeowners look east in the hopes of riding the wave of development, there are also worries that residents will be priced out of what has historically been a low- and moderate-income part of the city, forced to move further out, beyond the boundaries of the District. Homeownership can provide a needed hedge against skyrocketing rents.

This is where Lydia’s House, which helped the Waddys become homeowners, comes in. The nonprofit group is one of a handful of local organizations that offer guidance to first-time, low- and moderate-income home buyers looking to purchase property in the District.

>> Support Lydia's House with a donation

America’s Charities can help your company design and implement a program centered on supporting Lydia's House - through workplace giving campaigns, employee fundraising, cause-focused signature programs, volunteerism, matching gifts, Dollars-for-Doers, In-Kind Giving and other employee engagement and philanthropic initiatives. Click here to request a demo and learn how we can help you do this.