A Food Pantry Born From Experience

A Food Pantry Born From Experience 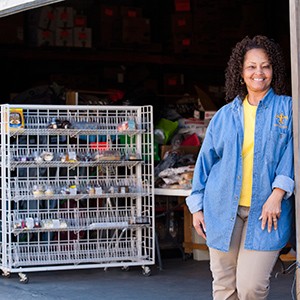 Gail Womack Murray grew up in the Ninth Ward in New Orleans, and enjoyed a ten-year career in accounting with a local bank before becoming a proud member of the U.S. Navy.

“In 1981, I joined the Department of Defense on Poland Avenue, and fell in love with the military. I was a little bit older, but I joined the Navy. With my active duty and reserve time, I served sixteen years.”

She saw active duty during Operation Desert Storm in 1991, and then stayed with the Department of Defense in a civilian role following her years of service. Then, an unexpected life event forced her to apply for food stamps.

“At the time, I was making less pay, and then I went through a divorce and was trying to raise three children. I didn’t qualify for food stamps, so I just didn’t know what to do. When I left the food stamp office, there was nothing at the house to eat. And I think the hardest part about it was that I had two in diapers, and I had a five year old.”

Miss Gail, as she is known, says it was tough for her to turn to a food pantry at a local Baptist Church. She never imagined that her family could ever face the threat of hunger. “It was really, really hard for me to go ask for assistance. I had a college education and I paid taxes all these years, and now I had to ask for help. “

The unconditional support and love she found at the food pantry, however, was exactly what she needed at such a tough time in her life. “The people were so nice,” she said. “They gave me food I could go home and cook for my kids and a voucher to go to Winn-Dixie… thinking back, I can’t remember everything that was in the box, but I do remember how nice they were to me in a time of need.”

After getting back on her feet, Miss Gail began her own food pantry in 1998 to help others in need. From the very start, Love in Action Ministry has received 100 percent of its food from Second Harvest Food Bank. Then, in 2005, another major life event struck everyone in the New Orleans area: Hurricane Katrina.