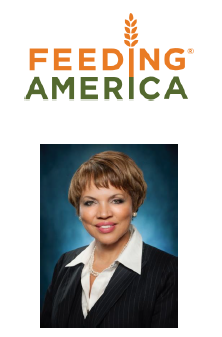 The Feeding America Board of Directors announced this week that, effective October 1, 2018, Claire Babineaux-Fontenot will become the organization’s new CEO. Babineaux-Fontenot is a seasoned leader who has held leadership positions at Walmart, Adams and Reese LLP, PwC (formerly PricewaterhouseCoopers) and in government. She will be based in the nation’s largest hunger-relief organization’s Chicago office.

“We are pleased to welcome Claire as CEO. Feeding America fed 46 million people last year. While extremely vital, we need to do more,” said Keith D. Monda, executive chairman of the Feeding America Board of Directors. “The organization needs a leader who believes that food insecurity in America is unacceptable and will devote her life to leading Feeding America’s charge to end hunger. I believe Claire is that individual.”

Through a network of 200 food banks and 60,000 food pantries and meal programs, Feeding America provides more than four billion meals to people facing hunger in the United States each year. Ranked as the third largest charity by Forbes magazine, Feeding America also supports programs that prevent food waste and improve food security among the people it serves.

“As one of the over one hundred children raised by my parents through biology, adoption and foster care, I saw the ravages of hunger firsthand, as many of my siblings entered our home with visible signs of malnutrition. I will harness my learnings from working in some incredibly successful organizations toward the passion of my life, the fight against hunger,” said Babineaux-Fontenot.

“There will be much emphasis—and rightly so—on Claire's business and leadership success, but I know Claire as the daughter of Warren and Mary Alice Babineaux, who fostered over 100 children in Louisiana's foster care system. From the very beginning of her childhood, her parents taught her to care for people and to work to make a positive difference in the lives of others—a commitment she still lives out today. Even as a top executive at one of America’s largest corporations, Claire always found time to serve others and her community. Claire’s professional and philanthropic background has uniquely qualified her to lead Feeding America as its new CEO,” said Chuck Johnson, president and CEO of the National Council For Adoption.

Babineaux-Fontenot held key leadership roles at Walmart throughout her nearly 13 years, ascending to executive vice president of finance and treasurer. She built highly productive, inclusive and cohesive teams across multiple geographies, cultures and regulatory environments during her time there. She was routinely recognized for her work both inside and outside of the company, particularly for her passionate advocacy and respect for people while achieving significant and measurable results.

A Louisiana native, Babineaux-Fontenot worked at Adams and Reese LLP, recognized as a top law firm by U.S. News & World Report, as a partner, firm-wide practice group leader and Baton Rouge partner-in-charge during her tenure. She also held various posts at PwC, including dispute resolution practice group leader for the Southwest, and for the State of Louisiana which included assistant secretary for the Office of Legal Affairs and administrative law judge for the Louisiana Department of Civil Service.

“For the past decade, Claire has championed vulnerable youth through her local and national engagement with Court Appointed Special Advocates. Claire leads with her heart but has the business acumen and extensive network necessary to advance any mission. Feeding America and the millions of Americans who rely on its programs everyday are fortunate to have Claire as their next leader,” said Crystal Vickmark, executive director, CASA of Northwest Arkansas.

Babineaux-Fontenot received a Bachelor of Science from University of Louisiana in Lafayette, La. in 1985, a Juris Doctor from Southern University Law Center in Baton Rouge, La. in 1989 and a Master of Laws in Taxation from Southern Methodist University Dedman School of Law in Dallas, Texas in 1992.

Feeding America® is the largest hunger-relief organization in the United States. Through a network of 200 food banks and 60,000 food pantries and meal programs, we provide meals to more than 46 million people each year. Feeding America also supports programs that prevent food waste and improve food security among the people we serve; educates the public about the problem of hunger; and advocates for legislation that protects people from going hungry. Individuals, charities, businesses and government all have a role in ending hunger. Donate. Volunteer. Advocate. Educate. Together we can solve hunger. Visit www.feedingamerica.org, find us on Facebook or follow us on Twitter.