From the Fair Housing Act to Ferguson: Where You Live Impacts How You're Policed

From the Fair Housing Act to Ferguson: Where You Live Impacts How You're Policed 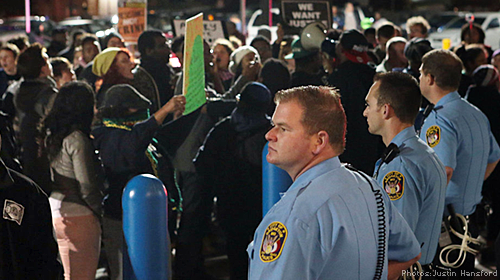 In less than 24 hours, the Supreme Court will hear a case that will define the future of decades-old legal protections against discrimination by landlords and banks against renters and homebuyers. The decision could have far-reaching consequences for the battle against housing policies that discriminate on the basis of race, sex, religion, disability, and other protected characteristics. And that, in turn, would have profound implications for efforts to ensure fair and unbiased policing in places like Ferguson and New York City and throughout the country.

Passed in 1968, the Fair Housing Act is one of the major legislative victories of the civil rights movement. It has helped rid our country of the most overt forms of housing discrimination, such as building single-race housing developments and using lending maps that demarcated black neighborhoods as mortgage-free zones.

But discrimination hasn't gone away – instead, it has subtly morphed, preventing us from creating truly diverse communities.