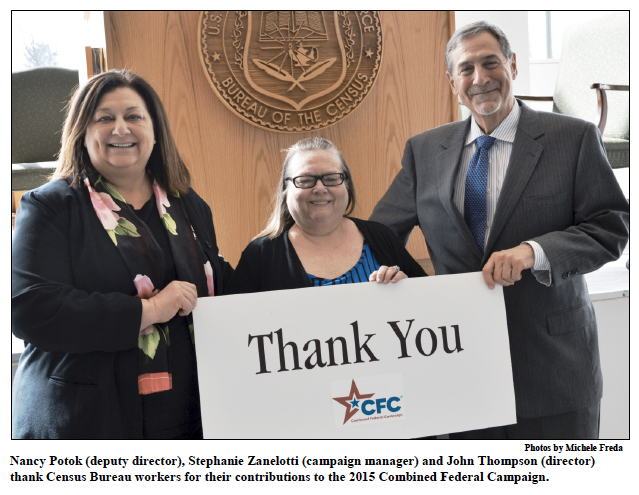 This article is a reprint, posted with permission from the Public Information Office, U.S. Census Bureau.

Jeff Brown — the outreach and engagement manager for America’s Charities — shared a personal story at the Census Bureau’s Combined Federal Campaign award ceremony on March 1. He spoke of how his adoption as a baby to a loving family was made possible by a nonprofit in the Washington, D.C., area.

“My good fortune can be attributed to people just like you,” Brown said. “When you give to the CFC, more than likely you are never going to meet the people who benefitted from your generosity. But, believe me, they’re out there and they’re thankful.”

The Census Bureau celebrated another successful Combined Federal Campaign during the ceremony, with agency leaders and CFC beneficiaries thanking Census Bureau staff for their generous $582,062 in contributions during the 2015-2016 campaign.

“I know that we are very engaged in our mission and very engaged in public service,” Census Bureau Deputy Director Nancy Potok said in the headquarters auditorium, with staff from the National Processing Center and regional offices watching via teleconference. “Knowing that in striving to reach our CFC goal, we contribute to the well-being of the public, not only in our nation but around the world, is an important goal that we share.”

The Office of the Associate Director for Information Technology and Chief Information Officer received the 100 Percent Participation Award, an honor recognizing that every member of the unit contributed. It is the first office to receive the award in this century.

Leaders and charity representatives expressed gratitude throughout the ceremony toward Census CFC key workers and organizers.

He noted his amazement at seeing participation rates go up throughout the campaign.

“You look at the participation charts the first couple of weeks and you’re like, are we going to do it this year?” Zuagar said. “And then all of a sudden, I don’t know how it happens, you start seeing the 70 percent, 80 percent, 90 percent. It’s just something that we do.”

Beth Gunter of the CFC-funded environmental federation EarthShare reminded the audience about the direct assistance that CFC contributions provide.

Gunter also said that for charities, CFC is especially important because it allows them to budget and use these unrestricted funds.

“That gives them the chance, when they get that call at midnight saying, for example, that Hurricane Katrina just happened, to have the money and unrestricted funds to help people,” Gunter said.

Brown noted his delight at speaking at an awards ceremony happening at the end of the CFC campaign instead of the beginning.

“I’ve never spoken at a finale, and I jumped at the chance because it’s my opportunity to say thank you,” he said. “Being able to thank you now for your generosity means a lot to me, and I know it means a lot to people out there who are getting help.”

He thanked Census CFC manager Stephanie Zanelotti and all who worked on the campaign.

“Every year you do a great job at Census, and from my heart, the charities I represent, and all the charities in the CFC, thank you very much for all you’ve done,” Brown said.

The ceremony proceeded with groups of team leaders and key workers coming on stage to accept thanks and awards.

The Combined Federal Campaign is the world’s largest and most successful annual workplace charity campaign. Its mission is to promote and support philanthropy through a program that is employee-focused, cost-efficient and effective in providing federal employees the opportunity to improve the quality of life for all. Since its creation in 1961, it has raised more than $7 billion for the charities designated by federal employees.