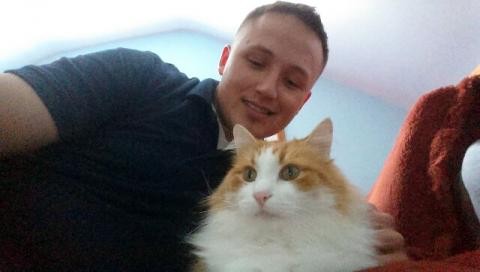 You might call Burt the cat unlucky. He has had 4 homes over the past 3 years.

In 2012, he was surrendered to the Bay Area Humane Society (BAHS) in Green Bay, Wisconsin, because his family said they could no longer care for him. He was 7 years old.

He was adopted quickly, but then returned to BAHS just a year later. His second family said they were expecting a baby and didn’t want a cat around.

At 8 years old, Burt was adopted again. His third family returned him to BAHS after a year because he didn’t get along with the family dog.

None of these reasons were any of Burt’s fault. And he was certainly a charming cat, for 3 different families to adopt him. Even so, BAHS staff worried that 9-year-old Burt might have a more difficult time finding another home the fourth time around.

“People often shy away from older pets, especially ones that have had multiple homes,” said Olivia Webster, director of operations for BAHS.

But all it takes is that one special adopter to walk through the door.