A Bolder Effort by Big Tobacco on E-Cigarettes

A Bolder Effort by Big Tobacco on E-Cigarettes 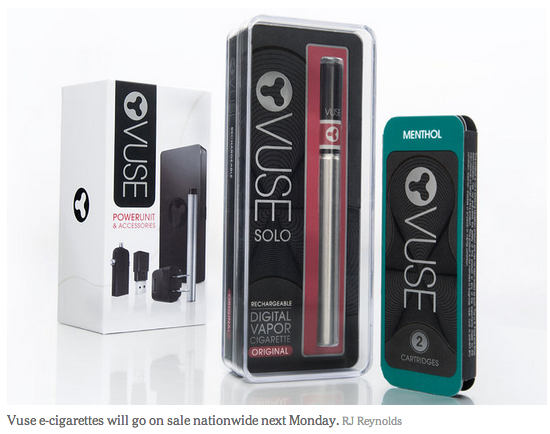 Electronic cigarettes, promoted as a healthier alternative to tobacco, are getting powerful new backers with an unhealthy reputation: big tobacco companies.

The development points to ways Big Tobacco is moving to turn the young e-cigarette market to its advantage.

E-cigarettes have become an overnight sensation, with $2.5 billion in sales, though that is a tiny fraction of the smoking industry. The devices have also touched off a public health debate. Some argue that e-cigarettes, which vaporize nicotine, offer a less dangerous alternative to cigarettes. Others warn there is insufficient evidence on the product’s health risks and whether e-cigarettes are prompting people to quit smoking.

In fact, the tobacco companies say they do not yet see evidence that most smokers are captivated by e-cigarettes, but they could become so.

Joining Lorillard, Reynolds plans a national marketing campaign, including television advertisements in major markets. E-cigarette makers say that move could popularize an alternative to tobacco, but critics warn it could glamorize smoking and lead people to smoke.

For example, public health advocates have taken issue with the advertising tag line NuMark uses on some ads for MarkTen: “Let It Glow.” The critics say the campaign plays off Disney’s animated musical “Frozen” and its hit song “Let It Go.”

Concerns about marketing of e-cigarettes, and whether the ads appeal to children, have prompted a Senate hearing planned for Wednesday. The Food and Drug Administration recently proposed guidelines for regulating e-cigarettes, but did not propose any restrictions on marketing, drawing criticism from some public health groups. Marketing of cigarettes is heavily restricted, with TV ads forbidden.

Matthew L. Myers, president of the Campaign for Tobacco-Free Kids, who is scheduled to testify at the Senate hearing, said the fact that the F.D.A. did not limit marketing allowed tobacco companies to return to the airwaves with ads that make e-cigarettes sexy, rebellious, glamorous — “exactly the same themes we saw work with kids in the U.S. for decades with cigarettes.”