Religious liberty, freedom of expression, the right to privacy, equality, and due process are the defining principles of our democracy. As the nation's foremost defender of civil liberties, the American Civil Liberties Union Foundation’s (ACLU) mission is to protect these values and realize the promise of the Bill of Rights for all people in the United States.

Their mission is carried out by a national staff of lawyers, a nationwide system of 50 affiliates, and the help of volunteers. The ACLU focuses on a number of key issues, including women's rights; reproductive freedom; LGBT rights; voting rights; immigrants' rights; criminal justice; and racial justice. In 2013, their Supreme Court challenge to the constitutionality of the Defense of Marriage Act (DOMA) resulted in a landmark ruling overturning this discriminatory federal law. In addition, since 9/11, the ACLU has led a national campaign to keep America both safe and free by demanding that government ensure our security without sacrificing civil liberties.

Since Election Day, the ACLU has seen a renewed sense of urgency from hundreds of thousands of Americans to protect civil liberties. In the coming weeks and months, the ACLU will be focusing on:

As other civil liberties challenges arise, the ACLU will respond — as they always have. Working in partnership with other organizations, the ACLU will fight to ensure that the rights and freedoms guaranteed by our founding documents are defended. Since the ACLU’s founding, they have held every president accountable to the Constitution, fighting for the rights of all Americans. With 1,100 staff across the country, an office in every state, and a growing base of support among the broader public, failure is not an option. 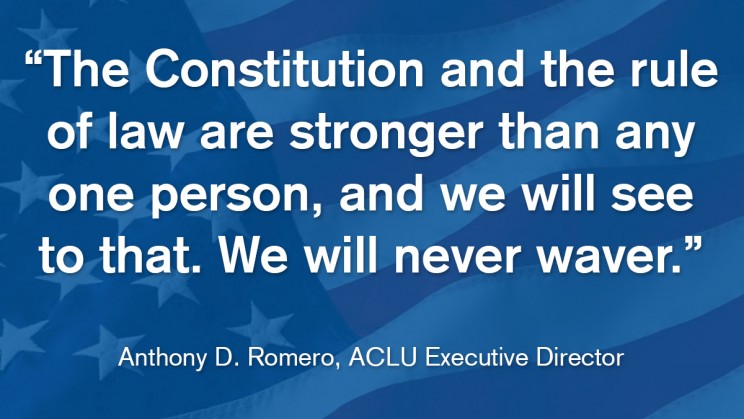 The need has never been greater for freedom-loving people to support the ACLU Foundation. Here’s how to take a stand against the growing threats to our most cherished Constitutional liberties:

To learn more about the ACLU, visit www.aclu.org.