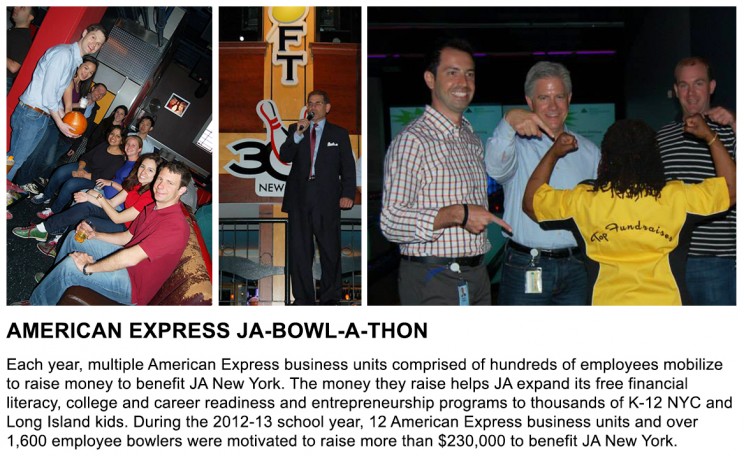 Junior Achievement (JA) of New York’s relationship with American Express spans nearly two decades of corporate philanthropic and volunteer support that is best described as “engaged giving.” American Express is a great example of a company that not only looks deeper into how it can support its surrounding communities, but also successfully integrates philanthropy into its business model to serve its own goals and mission.

Since 1995, American Express has mobilized and engaged over 25,000 employees to raise over $4 million dollars and to deliver financial literacy, entrepreneurship and college and career readiness programs to thousands of NYC and Long Island K-12 students. As a result, American Express’s corporate philanthropy model has prepared and empowered thousands of young people to contribute to the economic stability of their communities.

American Express believes that serving communities is not only integral to running a successful business, but is also part of their individual responsibilities as citizens of the world. The mission of their philanthropic program is to bring to life the American Express value of good corporate citizenship through supporting communities in ways that enhance the company's reputation with employees, customers, business partners and other stakeholders. They do this by supporting visionary nonprofit organizations that are: 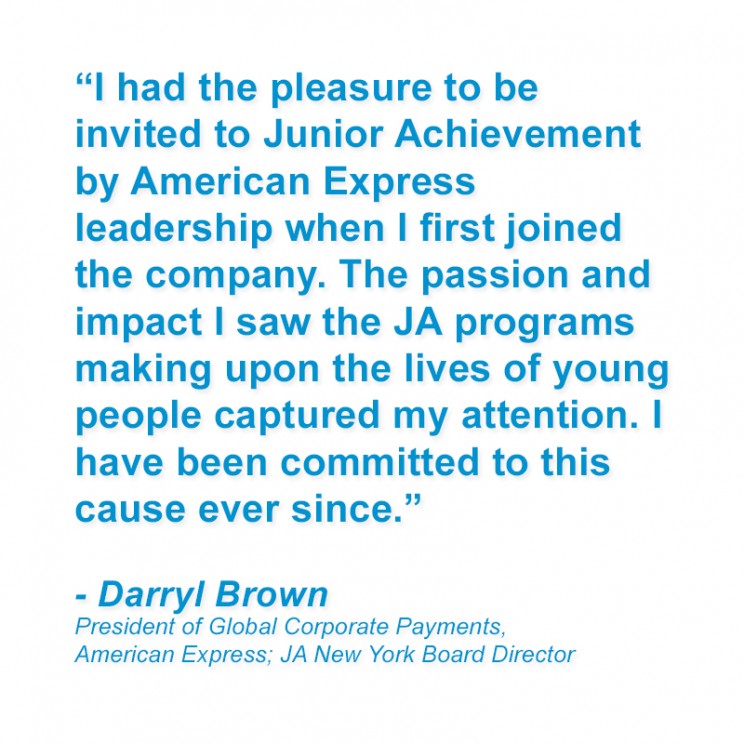 American Express’s support of JA in New York City reinforces the value of their commitment to the local community where they do business. They have created a philanthropically driven corporate culture where community citizenship is valued and encouraged from the C-suite through to entry-level ranks. From corporate foundation support and board governance to sponsorship opportunities, employee giving, fundraising and volunteer mobilization, American Express delivers 360 degrees of community investment.

Great corporate philanthropy begins at the top with inspired leadership. JA New York’s relationship with American Express began nearly 20 years ago when CEO and Chairman Kenneth Chenault served on the JA New York Board of Directors for seven years (1995-2002). As an affirmation of American Express’s commitment to the JA cause, he appointed Anre Willams (President, Global Merchant Services) to replace him when he stepped down from the board. Mr. Williams provided exemplary governance and leadership over an 11-year term (2002-2013), including five years serving as Chair of the Board of Directors before stepping down in 2013. He continued the American Express leadership connection by appointing Darryl Brown, President of Global Corporate Payments to replace him on the board. When asked about his reason for choosing to commit so much of his time, talent and resources to JA, Darryl Brown responded,

“I had the pleasure to be invited to Junior Achievement by American Express leadership when I first joined the company. The passion and impact I saw the JA programs making upon the lives of young people captured my attention. I have been committed to this cause ever since.”

Each of these leaders at American Express have inspired and motivated their employees and colleagues at all levels to get involved, while committing the company's unique skills and resources to address some of the city’s most pressing educational, youth, and economic development issues.

Results That Benefit Everyone Involved 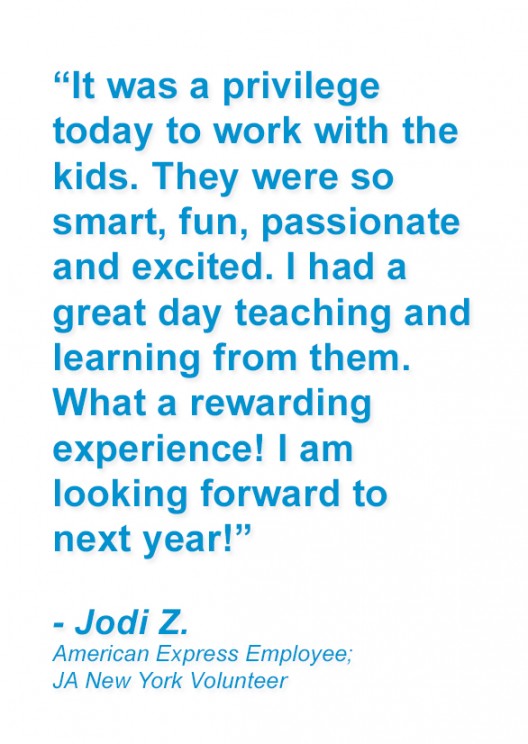 The benefits of the Junior Achievement (JA)/American Express partnership are mutually enriching. By focusing on education, economic and youth development, Junior Achievement (JA) programs contribute to the vitality of New York City and Long Island communities and the availability of a well-educated workforce.  And American Express’s support of JA provides a visible and meaningful demonstration of the company’s commitment to youth in its communities. The partnership supports American Express’s business objectives by bolstering employee morale, developing talents, improving the company’s reputation and driving internal innovation.  American Express employee volunteers who contribute their skills to JA derive a greater sense of purpose about their job and about American Express, while developing their own career and skills.

As a result of American Express’s financial and volunteer support, more than 67,000 K-12 students benefit from experiencing JA programs each year.  Their ongoing and long-term commitment also helps local students develop the competence, confidence and character needed to compete in today’s global economy.  JA New York Board Member and senior executive at American Express, Darryl Brown, sums it up best when he says,

“I believe that we at American Express have the opportunity to support and make an impact on the lives of thousands of children, teaching them essential 21st Century success skills including financial literacy, college and career readiness, and entrepreneurship. In turn, American Express employees have a truly rewarding experience. Our employees feel good knowing that they are making a truly meaningful and positive impact on the lives of kids who need our support and encouragement to believe in their ability to succeed.”

Our thanks to JA New York and American Express for sharing how their relationship got started and has made an impact in the community while engaging employees in the process!  To learn more about the impact JA New York is making, visit www.jany.org and read about Capital One/Junior Achievement Finance Park™ in our Featured Charity Blog.