Amidst Prosperity, Many In Silver Spring Struggle To Survive

Amidst Prosperity, Many In Silver Spring Struggle To Survive 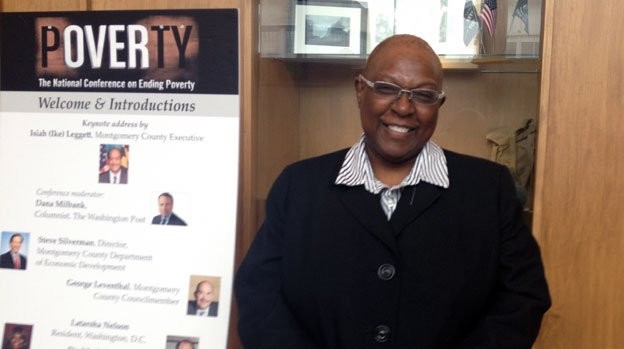 Ask most Silver Spring residents, and they'll tell you their community’s downtown has come a long way over the past decade.

These days, you can find all sorts of restaurants there, serving everything from jumbo diver scallops to lamb tartare. You can hit up the farmer’s market on Saturdays for organic apples and gourmet goat cheese. You can swing by the AFI Silver to catch an indie film, or — just next door — catch a live performance in Round House Theater’s black box.

But many of those amenities are increasingly out of reach for residents living at the bottom of the economic ladder, people like 54-year-old Queenie Featherstone. Four years ago, Featherstone’s job cut her hours, right around the same time that her rent went up. Suddenly, her apartment cost $1,000 a month, and she was only bringing in $600.

Eventually, she was evicted, and she’s been couch surfing or sleeping in her car ever since.

“I stay with dear friends and family who open their homes because they know I’m a decent person,” Featherstone says. “I’m not on drugs, I'm not on alcohol, I'm in my right mind. It’s just the way the situation fell.”

That “situation” has also meant working multiple part-time jobs in the hope that soon she'll make enough money to have her own apartment again.

“I'm a parent educator for Montgomery County Schools. I work retail. If a job calls me for temp work, I'll go!" Featherstone says. "Because hard work never killed anyone, as they say.”

A common story after recession

Ask the experts, and they'll tell you that Queenie Featherstone’s situation mirrors the struggles of many Montgomery County residents, people whose poverty is hidden in one of Maryland’s wealthiest suburbs.

“What’s been interesting in the 2000s in Montgomery County in particular is the county was actually making progress against poverty before the recession. We saw the poverty rate fall between 2000 and 2007, and the number of residents living in poverty declined,” says Elizabeth Kneebone, who studies suburban poverty at the Brookings Institution.