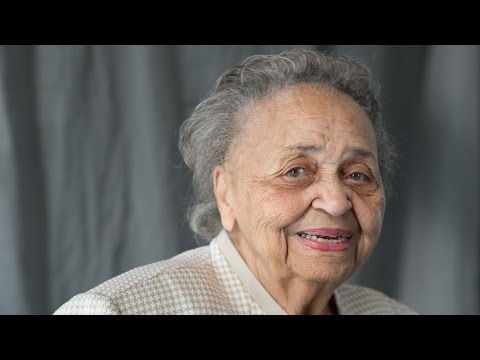 Dorothy Guilford has a simple message for politicians who enact laws making it harder for minorities, the poor and the elderly to vote: “I don’t think that’s right.”

She should know. She’s seen it all before.
Born in 1920 in Montgomery, Alabama, Guilford lived through most of the Jim Crow years, when laws discouraged African Americans like her, as well as poor white people, from voting.
When she first became eligible to vote, she had to take a literacy test and pay a poll tax of $1.50, a sum worth about $25 today. Anyone who couldn’t read or couldn’t pay the tax, which accumulated, couldn’t vote. Most white voters, however – those whose ancestors were on the voting rolls prior to the Civil War – were exempt from the test.

Guilford vividly recalls the struggle for voting rights that made her city the cradle of the civil rights movement.

She walked to work every day for more than a year to support the Montgomery bus boycott. She heard the bomb explode on the front porch of Dr. Martin Luther King Jr.’s parsonage during the boycott and listened to King’s steady voice as he calmed an angry crowd gathering in the street.

Several years later, she watched the Freedom Riders arrive in her city, only to be viciously beaten by Klansmen while police looked the other way.

So, no, Guilford doesn’t approve of the many recently enacted state laws that could disenfranchise hundreds of thousands of otherwise eligible voters in her home state and elsewhere. The upcoming general election will be the first under Alabama’s new photo ID law, which requires voters to produce one of 10 specific types of identification.

“It’s important,” Guilford says emphatically, “for everybody to be able to vote and let their choice be known.”

It’s in that spirit that the Southern Poverty Law Center is producing a new classroom documentary – tentatively titled One Person, One Vote. The Teaching Tolerance film will recount the hard-fought struggle and the sacrifices that led to the Voting Rights Act of 1965. It will focus, particularly, on the pivotal events of 1965, including the Selma-to-Montgomery March that moved the nation.

The SPLC is planning to distribute 50,000 copies of the film to schools across America, free of charge, in time for the 50th anniversary of the march’s conclusion on March 25, 1965.

Discrimination by another name
The purpose of literacy tests and poll taxes was, of course, to suppress the vote of African Americans. The Jim Crow laws were part of the framework of statutes that Southern states began enacting in the 1890s to legalize racial discrimination and enforce white supremacy following Reconstruction.

At the height of the civil rights movement, Congress banned...