By Jim Starr, President and CEO, America's Charities on April 23, 2019 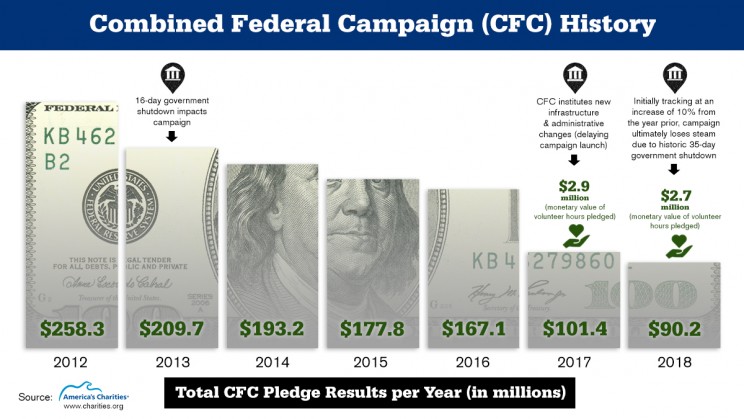 (Click here to view enlarged copy of graphic above)

The U.S. Office of Personnel Management (OPM) just released the final results of its 2018 Combined Federal Campaign (CFC), the workplace giving program for current and retired federal and military personnel. In 2018, CFC donors pledged a total of $90.2 million, only 10% less than the $101 million raised the year prior. (Yes, “only.” Read on for more context.) Perhaps the most significant area of recent growth is in retiree giving; retiree donations tripled in 2018. And while there was an overall pledge decline of 10.7% for all participating nonprofits, America’s Charities nonprofit members fared significantly better with an average decrease of only 5.6%. In fact, a number of our members saw a substantial pledge increase from the prior year, some as much as 240%. 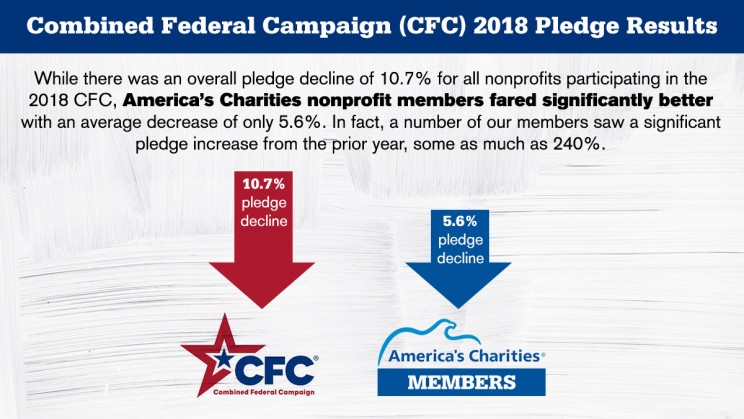 It’s important to put these results into perspective. The CFC has experienced declines since 2013 when the government last shut down. At that time, OPM announced plans to reinvigorate and modernize the campaign. These plans crystallized with the implementation of new campaign regulations, introducing many changes we believe are positive. Those changes took effect with the 2017 campaign, after year-over-year decreases in the CFC. Last year, I wrote about the enormity of those changes and anticipated that 2018 would produce the first increase in over a decade. And in fact, early 2018 CFC campaign data showed strong momentum. The campaign was tracking at an increase of 10% from the year prior – until the U.S. government entered the longest shutdown in its history.

The partial government shutdown lasted 35 days, during which 800,000 federal employees were furloughed or expected to work without pay. As we told the Washington Post, there was a sad irony to that situation. Not only do federal employees donate to causes they care about through the CFC, they also benefit from the very services these nonprofits provide. The need for nonprofit assistance became even more acute, sometimes critical, during the shutdown as federal workers struggled to pay rent and child-care expenses, buy groceries, and manage their daily lives. In the end, the same nonprofits that are funded by CFC donors helped bridge that vital gap; they helped federal workers make ends meet throughout the shutdown.

Critics have had much to say about the CFC the past few years; we have seen some go so far as to speculate its imminent demise. We disagree with this outlook, as we have for years. Yes, the CFC has changed. While the program has experienced tremendous growing pains, it has also evolved significantly since 2017, and it is not going away. It will take time to rebuild its momentum, but the positive results we saw before the 2018 shutdown took effect are a good sign that it’s going in the right direction. Yes, we are disappointed that the CFC did not see a higher pledge total in 2018, but the fact that our nonprofit members outperformed overall results gives us optimism for the future of the campaign. We are proud to partner with our members around the CFC and other workplace giving fundraising methods. We celebrate this impressive achievement with them.

What CFC skeptics and naysayers of workplace giving don’t seem to understand is that the more we emphasize the shortcomings of this program- in particular without offering solutions - the more we set ourselves up for failure. And we do mean we set ourselves up for failure. Each of us has used or at least benefitted from a nonprofit’s services at one point, perhaps unknowingly. Whether you have attended a public school, received care at a public health facility, visited a library, or enjoyed public parks, you have benefited from their services—and that is just the tip of the iceberg. We all rely on these programs; in turn, nonprofits rely on donors to sustain their programs so they can deliver on their missions. Workplace giving most efficiently and effectively sustains nonprofits’ work, without breaking a donor’s bank. The data is clear: workplace giving supports tangible change.

Want to learn more about the importance and effectiveness of workplace giving? How employee donors are Saving the World, One Paycheck at a Time? Join us on May 15, at 1 pm, for a short, free webinar and hear directly from nonprofits on this topic. We are proud to have representatives from two of our nonprofit members— Candi Maciel of the Best Friends Animal Society, and Willemijn Keizer of the Southern Poverty Law Center (SPLC)—discuss how this recurring fundraising mechanism fits into their revenue mix and what would happen if it disappeared. Learn more and register here.