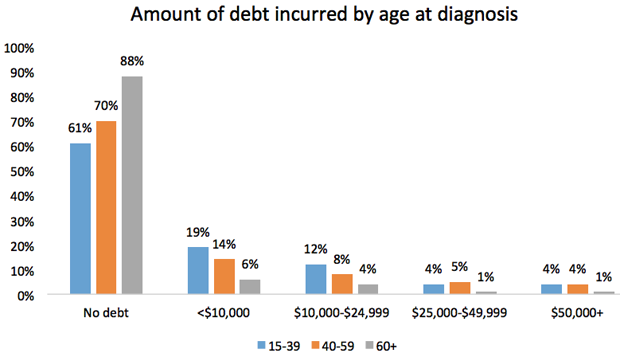 Cancer can take a significant financial toll on cancer survivors and their families, and they often face issues with health and disability insurance. In 2012, the LIVESTRONG Foundation conducted a survey with cancer survivors to better understand their needs, including their financial and health insurance concerns. In total, over 6,300 people took the survey, and the current analysis represents over 4,800 cancer survivors.

About 30% of the survey respondents reported that they or their family members had to borrow money or go into debt because of their cancer, its treatment or the lasting effects of treatment. Adolescent and young adult (AYA) survivors (those diagnosed between 15 and 39 years old) were particularly impacted financially. They were most likely to incur debt (39%), followed by those diagnosed between 40 and 59 years old (30%); survivors diagnosed at age 60 or older were the least likely to go into debt (12%). Women were more likely than men to go into debt (32% vs. 27%).

Also at increased risk for going into debt were survivors who were unmarried (38% vs. 27%) and less educated (37% high school or less and 37% some college vs. 26% college degree). Two percent of survivors reported declaring bankruptcy due to their cancer diagnosis. In addition, more than one-third (36%) of respondents reported making other financial sacrifices, such as exhausting their savings, tapping into retirement and college funds, losing their house and cutting out nonessentials.

>> Support LIVESTRONG's Work With a Donation