Founded in 1940, the NAACP Legal Defense and Educational Fund, Inc. (LDF) is the country’s first and foremost civil and human rights legal organization. Initially the legal arm of the NAACP, LDF has been a wholly separate and independent organization with its own Board of Directors for nearly 60 years. LDF was founded by legendary civil rights icon Thurgood Marshall at a time when the nation’s aspirations for equality and due process of law were stifled by widespread state-sponsored racial inequality. Marshall led LDF to the 1954 landmark victory in Brown v. Board of Education ending the doctrine of “separate but equal” and outlawing segregation in our nation. Marshall later became the first African-American Justice of the United States Supreme Court. LDF has acquired an unparalleled record of expert legal advocacy in state and federal courts and its legal victories serve as the foundation for the civil rights that all Americans enjoy today.

LDF works to secure full and fair access to democratic citizenship by promoting equality in education, voting and political participation, economic justice and criminal justice. Among its current priorities, LDF seeks to: 1) increase equity in education by increasing graduation rates (K-12 and college) among African Americans; 2) foster adoption of racially equitable and research-based approaches to school discipline; 3) ensure compliance with the Voting Rights Act, National Voter Registration Act, and other voting rights laws; 4) ensure that the job selection process does not negatively impact African Americans; 5) reduce employment barriers to those with criminal records; and, 6) decrease disproportionate incarceration and sentencing as well as racially biased exercise of discretion by police and prosecutors. Historically, LDF has worked through the courts and through advocacy to the executive and legislative branches.  LDF also uses educational outreach, monitoring of federal and state government activity, coalition-building and policy research to advance its mission. Additionally, through its scholarship, fellowship, and internship programs, LDF helps students to attend and graduate from many of the nation’s best colleges, universities, and law schools and to develop a lasting commitment to racial justice and public service.

Today, LDF’s mission encompasses not only precedent-setting litigation and policy initiatives, but also strategic campaigns informed by the latest and most innovative developments in social and political science, and economics. Through the Thurgood Marshall Institute (est. 2015), LDF is combining its traditional litigation strength with a new multidisciplinary approach to advocacy.

LDF is advancing the goals of racial justice and equality, transforming America into a more just and inclusive society. 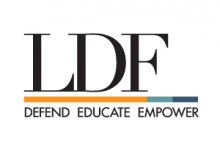